I’ve been reading comic books pretty much my whole life (with a break in my 20s and 30s that lasted about twenty years).  I got my first bunch of books at about age five from my grandparents, a random assortment of comics including Archie, Richie Rich, and Scoobie-doo.  I read those books over and over again, delighted by the art and stories.  A few years later I bought my first set of comic books with my own money when I found a spinner rack in the grocery store of the town where we took family vacations.  Back then the $10 I saved for our trip bought me 30-40 books and I grabbed everything that looked interesting: issues of Amazing Spider-Man, Uncanny X-Men, Avengers, Superman, The Flash and others.  This was the only source of comic books I knew, so every summer I would grab a new pile of monthlies and annuals and reread them all year long, wondering what happened between the issues that I purchased.

Around age 13 I stumbled upon a comic shop near where my dad lived and was astounded that I could buy back issues to fill in some of the holes in my collection.  I dug into back issue bins and avidly read new books on the racks, deciding where to spend my money now that comic prices had risen to 50 cents.  Shortly thereafter I took a bigger plunge and started subscribing to monthly books.  What a thrill to start receiving these wonderful stories in my home every week.  I read a couple of DC titles, including the New Teen Titans from Marv Wolfman and George Perez, The Flash, and a fun team up book with Green Arrow and Green Lantern.  But mostly I read Marvel books – Amazing Spider-Man, Frank Miller’s Daredevil, Chris Claremont’s Uncanny X-Men, Fantastic Four, The Defenders, Marvel Team-up, Marvel Two-in-one, and What If were among my favorites and at one point I was getting a dozen books a month.  I liked the street level action, the real world settings (growing up around New York I could picture the heroes I read about in the streets and neighborhoods I had walked through), and the humanity of the characters.

In 1984 when I was getting prepared for college I decided to let my comic book subscriptions expire so I would have more money for pizza.  That means I stopped reading a few months before Secret Wars (the original one) and, because I didn’t come back to comics until almost 20 years later, I also missed the heyday of the 1990s and the wild rise and crash of comics.  I remember seeing a few comics in the late 1980s and being confused about what was happening to some of my favorite characters.  Why does Spider-Man have a black costume? Wait, is Jean Grey alive again or dead again?  But comic books were mostly off my radar completely until my own son got old enough to start reading them – or at least looking at the cool pictures without tearing out the pages.  At that point I dug out my old long boxes – and discovered to my deep disappointment that almost half my collection had been thoroughly damaged from a leaking hot water heater.  Goodbye to all my old DC comics, my Spider-Man comics, and my Defenders comics.  To supplement what was left, I began purchasing black-and-white volumes of Marvel Essentials, starting with Spider-Man and moving on to early Fantastic Four, Avengers, Daredevil, and X-Men to supplement the comics that did survive.  And as my son grew up I bought for him (and for me) some trades like Civil War and Secret Wars. 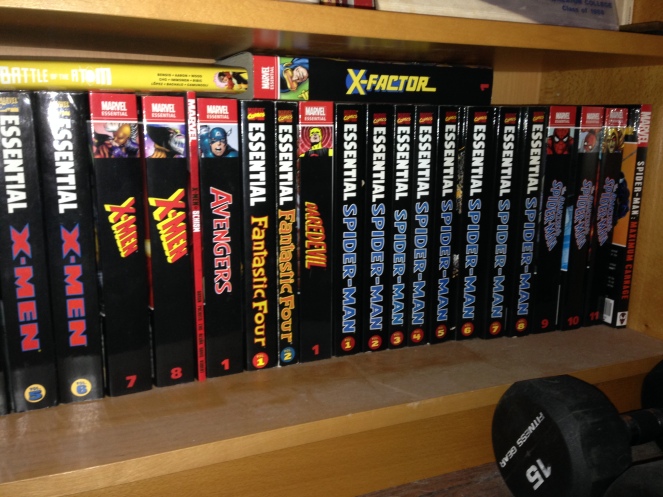 Then in late 2011 I stumbled upon a podcast that fully ushered me back into the world of comic books in general and marvel in particular: This Week in Marvel (available on iTunes and elsewhere).  I started listening with the very first episode and for the next 4 years I caught two episodes a week to stay fully up to date on new comic books, movies, TV, games and more from the ‘house of ideas’ that is Marvel comics.  I read a few DC comics but just as when I as a kid I found the Marvel stories and characters more enjoyable and relatable – plus the boom of Marvel movies made the entire universe of these characters appealing again.  I happily read Avengers v. X-Men, delighted in the story of Superior Spider-Man from Dan Slott (in my opinion maybe the best Spider-Man writer ever – though Chris Yost also wrote some fabulous Avenging Spider-Man and Superior Spider-Man Team Up stories), and dipped my toes in the water with some X-Men, Avengers, and Daredevil stories as well.  I read some deeply satisfy stories – including the Spider-verse story arc, Jason Aaron’s Thor, and the ‘rescue’ of Nightcrawler (always my favorite X-Man).

However, something changed for me in the middle of 2015.  Part of it came from ‘reboot fatigue’ as Marvel prepared for its third significant reboot in four years (Marvel Now, All New Marvel Now, and then All New All Different).  Part of it came from realizing just how expensive comic books had become – the days were long past of course when I could but new books for a quarter but seeing #1 issues come out at $5.99 was staggering to me and it put comic book buying decisions squarely into the ‘grown up’ part of my mind instead of the ‘I still feel like a kid when I read these’ part.  I also found myself disappointed in the way the Secret Wars line-wide story from Marvel was evolving (or what felt more like devolving) and even started fast forwarding and then skipping entirely the This Week in Marvel podcast in favor of other podcasts on comic books and pop culture.

Perhaps the biggest contributor to the shift in my reading came from exploring the incredible world of independent publishers.  Dark Horse, Image, and others are making some fabulous books these days and have been for quite a while; lifting my sights beyond Marvel opened up vistas of amazing art and storytelling I had barely begun to discover.

What sealed the deal for me recently was stumbling (through Twitter) upon Humble Bundle – a pay-what-you-want service that provides books, games, and other items (check them out at www.HumbleBundle.com to see what’s on offer this month).  For anything over $16 in January I could unlock hundreds of pages of books from Image – including trade volumes of Bitch Planet, Invincible, Low, Kaptara, Outcast, Phonogram, Saga, Wolf and more.  I happily paid more than the minimum but still far less than it would have cost to purchase even a third of these books and roughly the price of 12 single issue comics from Marvel.  Some of these are superhero stories but many of things I’m reading now come out of other genres.

I’m not saying that I’ll never read Marvel comics again or that I’ve lost interest in superheroes; in truth it’s not that simple.  I’ve really enjoyed the Marvel movies and TV shows (most of them anyway) and I expect I’ll still pick up stories about Spider-Man, Daredevil, and other of childhood favorites from time to time.  But I realized over the fall that I just don’t care that much about any of the current Marvel characters or story lines to pay $4 for a single issue; I’d rather dig into some of the excellent and more self-contained stories coming out of independent publishers.  For now at least, make mine Image.